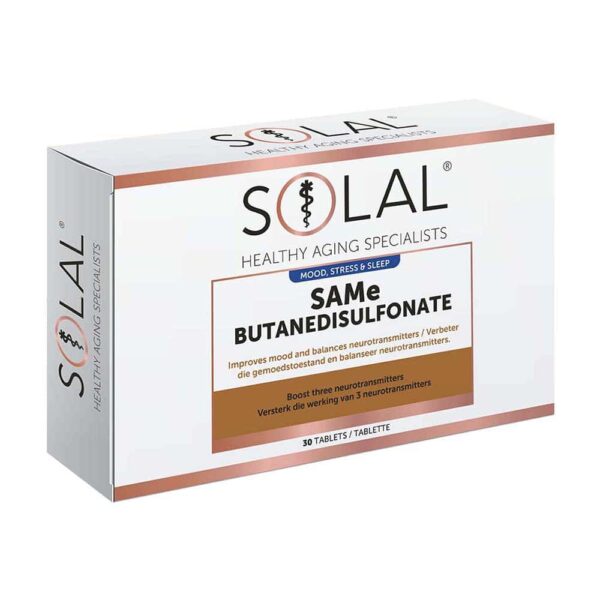 SAMe is an amino acid that enhances brain function, improves mood and balances neurotransmitters. It has powerful liver detoxifying and natural anti-inflammatory effects.

If you purchase this product you will earn 199 NichePoints to the value of R19.90
Tag: Mood Stress and Sleep

DISCLAIMER:
Any products you purchased through our website should be used as directed on the product instructions and packaging. As everyone has different skin, body and health conditions, results may vary.

Same (s-adenosyl-methionine) is a naturally occurring molecule that occurs in virtually all tissues and fluids. SAMe functions primarily as a methyl donor. A wide variety of molecules accept SAMe’s methyl groups; naturally occurring recipients include proteins, phospholipids, DNA, RNA, hormones, and the energy transporting amino acid creatine. Methylation is essential to the development of the phospholipid bilayer that makes up the outer membranes of normal cells and thereby contributes to membrane fluidity. SAMe-mediation is also critical for the formation of neurotransmitters in the central nervous system. Hepatic transmethylation is also important as 85% of total body transmethylation occurs in the liver. After donating its methyl group, SAMe is converted to s-adenosylhomocysteine, which initiates the important transculturation pathway in the liver, resulting in the generation of glutathione, the most potent antioxidant in the liver. Both folate and vitamin B12 are essential co-nutrients in the metabolism and replenishment of SAMe. SAMe may be beneficial in joint regeneration due to analgesic and anti-inflammatory effects. Preliminary evidence suggests SAMe might stimulate articular cartilage growth and repair, specifically chondrocyte proteoglycan synthesis and proliferation rate. SAMe might also protect against cytokine-induced cell damage.

Take on an empty stomach at least 30 minutes before a meal. These doses can be doubled if adequate benefit is not obtained after two months of use.

Do not use this product if you are hypersensitive (allergic) to any of the ingredients. If you are on any medication or suffering from any medical condition, it is advisable to seek medical advice before starting any new medicine, supplement or remedy. Do not exceed recommended dosages unless on the advice of a healthcare practitioner. This medicine has not been evaluated by the Medicines Control Council. This medicine is not intended to diagnose, treat, cure or prevent any disease.

Do not use continually for more than three months without consulting your healthcare practitioner.

Do not use SAMe with prescription antidepressants such as Monoamine Oxidase Inhibitors (MAOI’s) or Levodopa or if diagnosed with mania or bipolar disorder, unless under the supervision of a medical practitioner. SAMe can aggravate manic episodes in manic or bipolar individuals.
Surgery: Discontinue SAMe at least two weeks before elective surgery.

SAMe should not be used in manic and bipolar patients as manic episodes could be aggravated.

Monoamine Oxidase Inhibitors (MAOI’s): Because SAMe works in a similar way on serotonin and other neurotransmitters, concurrent use may have additive effects such as hypertension, hyperthermia, agitation, confusion, coma, etc. SAMe should be avoided in individuals taking MAOIs and for two weeks after discontinuing an MAOI.
Antidepressant medicines: Concurrent use might cause additive serotonergic effects and serotonin-like side effects.
Levodopa: SAMe methylates levodopa, which might worsen Parkinson’s symptoms.
The use of SAMe with the following medicines may lead to increased serotonergic effects and should thus be used with caution: Meperidine, dextromethorphan, pentazocine and tramadol.

Safety during pregnancy and whilst breastfeeding has not been established.

Sugar-free.
Suitable for vegans and vegetarians.

There are no reviews yet.